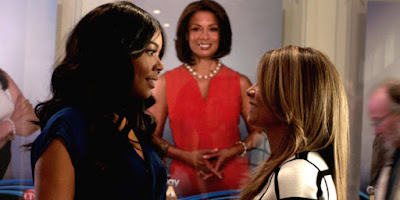 Being Mary Jane Season Premiere Recap
By: Honey B. Baker

Okay, I’ll be the first to admit I was no in a rush to watch the season 4 premiere of Being Mary Jane. Because I knew Mary Jane would be coming with the bullshit. And as per usual, she did not let me down. I was disappointed in the lapse of time between this season and last. Obviously, so many things have transpired since the closing scene of last season’s finale and now were left filling in the gaps.

To be honest, I would have much rather this season having picked up right where last season left off. But enough about my preferences and let’s get into the recap.

The episode began with Mary Jane seductively walking into her bedroom and asking the mystery man to give her a moment. At this moment, I already began rolling my eyes. I love Mary Jane but I was disappointed that she is still trying to sex her way through past hurts with temporary flings with even more temporary men.

Later on in the episode it is revealed that Mary Jane’s lover for the night is a nameless, handsome Brit that she met while bar crawling with her sidekick, Kara. After having a freakout moment about having an anonymous one-night stand she composes herself and returns to Mr. Brit in bedroom and places a rubberband on his wrist. As far as that is concerned I bet on Wednesday morning office supply stores had an influx of women purchasing bags of rubberbands. The purpose of the rubberband was to signal to Mr. Brit how she wanted him to fuck her. I hate using the word fuck but that’s all it was. Although, I thought the idea was silly I could deal with that better than her next fantasy she released upon Mr. Brit. Her true fantasy was she wanted a man to tell her, “I love you.”

As this scene played out I profusely shook my head incredulously and shouted, “Really, bitch?!?” at my television. It has been known since season one that MJ is love starved. But could you imagine even in your wildest dreams asking a random one-night tryst to tell you they love you? To be honest, I walked out of the room for a moment after that scene because her inner despair made me uncomfortable.

As far as the career front is concerned it looks like all was well for MJ with a big move to a national media market. However, MJ quietly reveals to Kara that her parting with her former employer was not as amicable as she would like people to believe. Apparently, during the show’s lapse she began to rail against police brutality on air in the aftermath of Niecy’s violent encounter with a police officer. Her “militant” stance apparently did not make her any friends at SNC especially considering the close calls and run-ins she had in the past with SNC execs.

Speaking of Niecy, she is possibly my least favorite character on the show. However, it is clear that Niecy and her children especially her son are suffering long term trauma as a result of her violent traffic stop. The show writers try to fill in the gaps about what transpired since the season finale but it left much to be desired. However, it was alluded to that in an attempt to sully Niecy they attacked her family's past including Patrick's past drug use. Unsurprising Niecy’s baby daddy, Dante has popped back on the scene and it’s clear he has his eyes on spending Niecy’s settlement money and it is also clear Niecy is blind to this fact.

Back to MJ in New York, rumbles have begun to circulate that Rhonda Sales, an veteran black star newscaster (and MJ's professional idol) will be stepping down and MJ is a shoo in to be her replacement. However, Rhonda quickly crushes MJ’s hopes with a nasty read and she makes it clear that she is not going anywhere for at least 5 years and that MJ was going to be froze out, literally.

While on the job, MJ runs back into Mr. Brit who flirts with her live on air and after the camera cuts he reveals that he feels “fate” brought him there. At this moment, I just kinda sat there with the “Really, dude?!?!?” look on my face. He is charming but a dude popping up on air on your job is creepy. Mr. Brit leaves MJ with a ticket to attend a comedy show.

It also revealed in the season premiere that MJ has retained a $20,000 matchmaker. It is clear that the matchmaker is not impressed with Messy Mary Jane Paul from their initial meet and by the close of the episode the matchmaker has broken up with MJ and told her in so many words she needed to get her shit together. MJ's issues must be extremely deep if the matchmaker was not willing to take her $20,000.

I want to see MJ win on all fronts, career and love wise. However, like the matchmaker told MJ she has some major blind spots that she needs to address before she can be in a position to be ready for Mr. Right. In all honesty, I am still on the fence about whether or not I will religiously watch BMJ this season. But I have grown tired of Mary Jane’s messiness. At what point is she going to grow? Every time I think I see growth she soon regresses.
-->