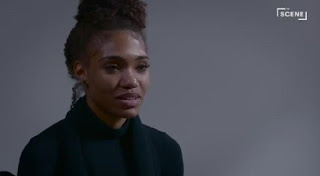 By: Honey B. Baker

Last night as I was social media stalking I came across a video with the headline, “Girlfriend confronts boyfriend about cheating.” Hmmm, I saw that the video was the six minutes and at first my short attention span said, “Nah” but then again I was intrigued.

Kourtney and Leonard’s love story started out like most people’s love story does: boy meets girl. However, like many love stories theirs’ soon fell apart. What struck me so much about their conversation were the similarities between that a conversation I had with an old flame last year, someone who I had sadly loved deeper than he ever deserved.

I was home for fall break from my short-lived sojourn to law school when we ran into each other at a pet store. We spoke and I left. However, a few minutes later he called and asked did I have a few minutes to talk.

Me and Jay's story started out much the same: boy meets girl. We became acquainted through mutual friends and at first I wasn't attracted to him. But his wit, charm, and unique personality drew me eventually. I fell and I fell hard with Jay falling right behind me but as things tend to do they fell apart.

We met in a parking lot and he joined me in my vehicle. “Jay*, what do you want to talk about?” “We left things bad, Honey.” “Yeah, we did.” I thought about the last conversation we had before I'd moved and it wasn't pretty. Accusations flew over some "he said, she said" mumbo jumbo. An awkward silence fell between us that I cut with the questions that had been burning me up for quite some time. “Why wasn’t I enough?” He gave me an emotionless look, “What do you mean?” “Jay, I wasn’t never enough for you. You made that clear. I mean, what was wrong with me?” I said I wouldn't cry but yet there I was scanning my car's interior for a box of Kleenex, a Zaxby's napkin--something to dab the tears away. “Nothing is wrong with you. You're an amazing women. You're attractive, you're intelligent, and you have a lot going for you.” Cue: Not My Kind of Girl by New Edition right about now.

Leonard and Jay shared a very similar deposition; detached, unresponsive, and a bit of feigned care but not a trace of remorse--just a whole lot of lip service and empty talk. That’s what struck me the deepest was that shared lack of remorse. Jay and Leonard are what I like to call emotional anarchists. They are the types that will cause emotional chaos in your life and then look at you with a look of befuddlement without a second of remorse when you react emotionally to their actions.

What I learned was being “friends” meant being a friend when it was convenient and advantageous to him. Witnessing my greatness meant checking in on occasion to see if I was still on the market and if he could “slide through”

I’m sure with Kourtney as with me when I sat down with Jay she was seeking some form of closure, some answers to her why’s and what’s. But people who are emotional anarchists cannot provide those answers because simply they do not have them. People who are emotional anarchists want to see you squirm because they cannot empathize with you. They want you to come to them begging for answers and “closure”. Emotional anarchists will never give you closure and trying to get closure from them is akin to expecting someone who stabbed you to patch the wound. Allowing them to stay in your life will only lead you further down a path of hurt and confusion.

I know some people wonder why Kourtney stayed. I can’t speak for Kourtney but if I had to say I’d say this. Feelings are not like light switches you cannot simply turn them on or off no matter how fucked up someone treats you. However, the light eventually will start to dim on its on.

I respect her for waiting to sit down and hash it out like an adult but some people are incapable of rising to that same level of emotional transparency. At the end of the day, I deeply felt for Kourtney because I’ve been there. No, Jay wasn’t a serial cheater but his indecisiveness about us caused me deep emotional scars because it left me confused with a depleted sense of self-worth.